Multi-award-winning Mediterranean beauty, Lisa Panagos®, is an American singer, songwriter, actress, producer, and executive producer. Although born in the USA, Lisa possesses a unique, exotic makeup that can be traced back to her ancestors from Greece and France.

Lisa has kicked off 2022 winning the ‘BOOKS for PEACE International Award 2022’ by the President and co-founder Antonio Imeneo.  This award is a thanks for people, organizations that work, live to promote quality of our life on this Earth, and promote Human Rights, Peace, Culture and integration between peoples.  In 2021 Lisa won ‘Best R&B/Soul Album’ for “Beautiful” from The Akademia Music Awards and also received a nomination by the Hollywood Music In Media Awards for ‘Shut Down,’ the best song in the Adult Contemporary Category. In 2020, Lisa was thrilled to win the ‘Artist Vision Award’ from The Akademia Music Awards in Hollywood, California. Her previous album, “Inside,” released in 2020, received many accolades, press and radio play to date. Both Albums “Beautiful” and “Inside” were mixed at EastWest Studios by Grammy and Emmy-winning engineer Clark Germain. “Inside” was up for Grammy consideration at the 61st Grammy Awards for ‘Best R&B Album of the Year.’

There is a worldwide buzz about Lisa’s new R&B/Soul album “Beautiful,” which she released on her label, Panagos Global Entertainment (PGE), and can be purchased worldwide.

Other recent awards include ‘Best R&B Soul Song’ for ‘Rescue Me’ and the 2019 Executive Award for R&B/Soul by The Akademia music awards in Hollywood, California.

During her all-encompassing acting, performing, and recording career, Lisa has worked with some of the music industry’s most celebrated producers, re-mixers, writers, and arrangers, including Clark Germain (U2, Sting, Coldplay), MacQuayle (Beyoncé, Madonna, Lindsay Lohan), and Rob Chiarelli (Madonna, Janet Jackson, Will Smith).  Also, hit songwriter Alex Forbes (Cyndi Lauper, Taylor Dayne), Ed Goldson (Jay Z, Eve), and Dave Bianco (Bob Dylan, Mick Jagger, Vanessa Williams), to name a few.  Lisa has developed an enviable catalog of over 500 songs and tracks ranging from R&B /Soul to Pop, Dance, and Jazz.  She is pursuing licensing opportunities for film, T.V., and other forms of emerging media. Lisa has performed to audiences worldwide with her original music, musical reviews, and Broadway shows, forging her as an internationally recognized touring artist and performer.

Lisa’s Broadway credits include “Annie Get Your Gun,” starring Reba McEntire and Tom Wopat at the Marquis Theatre, NYC, and the first national tour of the same show starring Marilu Henner and Rex Smith.  Other theatre credits include “Sophisticated Ladies,” starring the Duke Ellington Orchestra, “Jesus Christ Superstar,” “Phantom of the Opera,” and “Camelot,” to name a few. While a featured singer and “Sporting Doll” at the famous Monte Carlo Sporting Club on the French Riviera, Lisa performed for the Royal family and opened for a host of legendary stars such as The Gypsy Kings, Donna Summer, Tony Bennett, Harry Belafonte, and Shirley MacLaine.

Aside from her ability to perform live, Lisa’s acting credits in film and television include the Emmy nominated T.V. series “Yes Dear,” the multiple award-winning T.V. show “Law and Order,” the Oscar-nominated movie “Donnie Brasco,” Indie Film “The Bookcase,” amongst many others. “IMDB“.

Lisa has been extensively trained in all areas of the performing arts and has a dedicated passion for music, acting, songwriting, and producing. She has studied and refined her craft in acting with world-renowned coaches such as Larry Moss (Hillary Swank, Leonardo Dicaprio).  Also, Michelle Danner (Jamie Foxx, Selma Hayek) and Patsy Rodenburg (Judy Dench, Ian McKellen) to name a few.  She trained in dance at Broadway Dance Centre, NYC, Steps on Broadway, NYC, Washington School of Ballet, and North Carolina School of the Arts.  Internationally recognized vocal coaches include Don Lawrence, Carlo Menotti, and Rona Leslie.

Lisa has a Bachelor of Fine Arts in music, acting, and dance from Syracuse University.   An awards recipient from multiple U.S. and International organizations to date, including the IBC in England, Lisa is an active member of SAG-AFTRA and Actors Equity Association.

Lisa currently resides in Hollywood, California, where she is developing her live show and has begun pre-production on her forthcoming record. She also has landed a leading acting role in the mob movie “Destinies” written by Nick Christophers and Peter Papageorgiou. Singer, songwriter, actress, to be filmed in New Mexico.

Lisa speaks conversational French and has performed arias in Italian, German, and French. She has been featured in various magazines such as Music Connection Magazine, Authority Magazine, Poze Magazine, Talent Raters Magazine, to name a few, and has been a featured artist on multiple syndicated radio shows to date.

There is no denying that Lisa Panagos® is an award-winning singer, songwriter, actress, and producer, and executive producer  full of passion and soul.  Her sultry vibe captures audiences worldwide.  Lisa continues to rise charts, win awards, and is quickly become a force to be reckoned with in the entertainment industry worldwide. https://lisapanagos.com 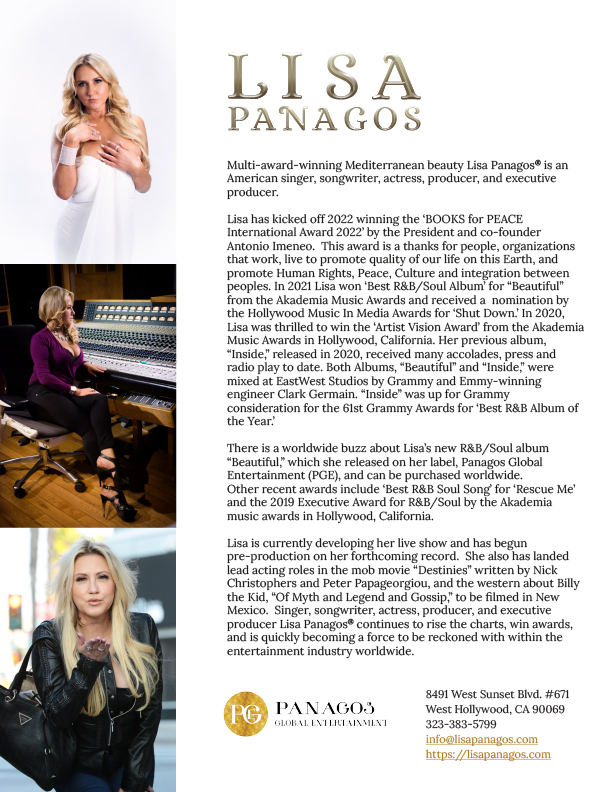